It can hardly be imagined that the Brockhaus Conservation Bilder-Lexikon of 1837 stated a little unfriendly, "The Eifel is a wild, barren mountaineous area, rich in limestone, slate, basalt and old lava, in the Prussian province Rhineland."
Wild, barren, boring? That was perhaps the case in earlier days. Nowadays, people come to the Eifel because they like to be close to nature, and because they do not like to follow the beaten path of mass tourism. The Eifel Residents understand that the landscape and the cultural landscape should be retained.

Traditions and peace in the Eifel 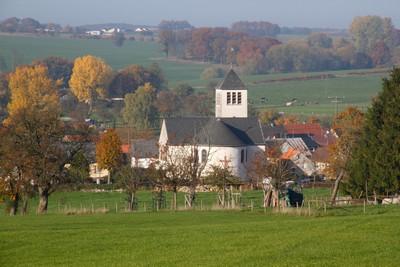 Guests are welcome, but the Eifel does not repose its loved traditions. The renovation of villages of the last two decades has been very fruitful. Visitors are often surprised by how even in the smallest villages old buildings are restored and refurbished with much love and dedication. In many villages, the old traditions are still aliver.

Eifelers love their region! Nobody in the Eifel misses the hustle and bustle of the big city. On the contrary, the townspeople come to the Eifel to fins some rest.

Neuerburg, an authentic city in the heart of the Eifel Typical for residents of the Eifel is a farmer near Neuerburg. His "village" consists of a farm, which is occupied by his family and thirty cows. His first neighbors live a mile from him. When asked whether he did not feel lonely, he answers: 'No, why? I am born here. I've always lived. I ga to the fair in the neighboring village once a year, to the party.'

Fascinating in the Eifel also is everything that has to do with the word 'geo'. Along the different geological trails one can find volcanic fire without any danger.

As many as 140 castles, the finest noble families from the Eifel left, of which most are now romantic ruins. The castles of all German castles, Burg Eltz, is also located in the Eifel. The once so mighty monasteries have fomed the landscape and the people. even now, abbeys such as Maria and Himmerod Laach are inviting to silent repentance.

Finally, the Eifel is also one of the oldest industrial areas, something which you hardly notice when touring the region. Especially the iron industry has old roots.

A great camping. Have had a great holiday this summer we go there again next year.

Very nice location of the campsite. A nice quiet river flows through it. Further.

Nice quiet family campground with all the helpful owners nice swimming pool next to the campsite.

Information about the swimming pool

Unfortunately the pool will nt open this year.

In the vicinity (20-30 minutes by car) are several outdoor pools.